Skip to Main Content
Free shipping on orders over $150.00 dollars

Fire is one of the most dangerous and destructive tragedies in the world. It can occur due to any possible reason. Most commonly due to sparks in electric wires, lightning, volcanic eruptions, and sometimes due to man-made reasons. In some cases, the fire gets uncontrollable and grasps the huge area in itself. This makes it hard for ordinary extinguishers and water buckets to calm.

Even the big band trucks and vans fail in this mission of controlling fire.

In such cases, aerial fire fighting methods are used to beat out the fire.  That is, a direct attack on the edge of the origin of fire using the pressure of an excessive amount of water through the aircraft.

These aircraft sometimes have belly tanks and sometimes water bucket tanks. Although helicopter belly tankers are gaining increasing popularity in the firefighter's marketplace. Here are some reasons that Helicopter water buckets can be the hands-down winner over the belly tanks system.

As you've read above in the title, we are here going to learn all about helicopter water buckets, i.e. what they are? How they work and how they can go better over any other advanced technology.

What are Helicopter Water Buckets?

As clear from the name itself, a helicopter water bucket is a type of bucket which is specialized to be hung by a rope or some cable attached to the helicopter. It is further filled with water that helps in putting out fire through aerial firefighting. The bucket is designed in such a way that it can hover over and collect water from various water sources. It has a releasing valve at the bottom that is being controlled by the controller sitting inside. After aiming at the edge of the fire, the controller releases the water to suppress the fire.

How are they better than other advanced methods?

The Helicopter Water Bucket method doesn’t require a high amount of fuel, parts, and high-quality power to run. This method may seem a little old over these new belly tanks technologies, but in some aspects, it’s proven better than other methods. The first reason is budget-friendly. The whole system setup is inexpensive as compared to other tank systems. It requires less maintenance, as it doesn’t have a lot of parts in it. It lasts longer and thus it has a lesser downtime than other complex systems. This way, it saves a lot of money, and affects the revenue generation during fire extinguishing operations, in a very positive way. Also, the pilot drags the buckets into tough areas like the tops of trees and bushes. These activities cause no harm to the bucket as it’s made from pretty durable, tough, and strong to avoid breakage during dipping into forestry areas.

These are a few reasons that make a helicopter water tank a better option for operations like suppression of fire.

We hope this informative article has delivered all the necessary information about helicopter water buckets. To read more about other interesting technical stuff, visit www.tylergraymodels.com 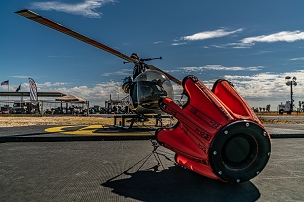 The Ultimate In Scale Modeling

© 2022 by the Tyler Gray Models. All Rights Reserved